This is my second Deus Ex game. The first one I played was the original, Deus Ex. Human Revolution was on my “to play” list, but I ran out of time before Mankind Divided came out. After playing Mankind Divided, I know I have to go back and play Human Revolution because this series is awesome. The story is in depth without being too overwhelming to new players. Mankind Divided gives the player the option to review the story to catch them up to speed. It’s a great idea and I liked that it’s optional for the fans that maybe didn’t need a refresher course.

Another aspect that I liked about the introduction/tutorial of the game is that they start you off with max augmentations and health just to give you a taste of what it’s like… then they take it all away. It’s a convenient way to see what’s in store and what direction you may want to go in the future. With this game being in first person, I found myself a little overwhelmed at first. I’m so used to the FPS approach of destroying everything that I struggled with stealth and utilizing my augs. After awhile, I got into the swing of things and learned how to use certain augs to my advantage. There was one memorable section of the game when I had to break into a bank’s HQ to steal raunchy intel for a reporter. That was an intense part of the game that really made me think about how to be stealthy and use my augs to my advantage so I wouldn’t raise any alarms. I was in a “public place” in the game and had several eyes on me. Very stressful. Trying to do stealth in a public place is different than being behind closed doors and running in guns blazing. It has a different feel to it. When I finally made it to the office with the intel, it felt like such an accomplishment!

The story is smooth and has some very interesting side quests and interactions with NPCs.. After a terrorist attack, there is a divide between the augmented humans and non-augmented humans. Humans are afraid of those with enhancements and the augs are pushing back in resistance. A “racism” of sorts. The game really makes you feel it too. Racist terms such as “clanks” are muttered at you as you walk by. Some NPCs straight up get in your face about it. When you go to the subway to travel to another part of town, you can be stopped by the police for being an aug. Since the police are a force that you can take out, the stress is high when you are stopped by one of them and they ask for your papers. You find yourself on edge…is this the time that they are going to shoot because tensions between man and augs are high? Then you feel that immediate relief when they let you through.

As the story progresses, you are presented with making story-altering choices. These choices will affect the storyline permanently and you can’t go back and change anything (unless you have a save to reload of course). There were a few times in which I was stumped on which decision to make since you aren’t really given any insight on how it will actually change your story or relationships with certain NPCs. Many of these choices aren’t a matter of “good” or “evil”. They are just choices that the player has to make based on what their interests are and what they think is the best route to go. You know that feeling when Green Goblin drops Mary Jane and also a cable car filled with children and you’re like “oh no Spidey how you gonna save them all?!”? That is what this game is… and most of the time you can’t save them all. This decision-making also goes into conversation choices that you can make. There are a few times when you have to be able to influence a character to do (or not do) something in a high-stress situation. You can successfully convince them to do what you want, and you can also fail. The outcome of it will affect your story permanently. It is very intense but successfully deescalating a situation is fun and a unique, unpredictable experience that you don’t find in many games.

Now, to discuss some mechanics of the game. Leveling up in Mankind Divided isn’t overwhelming either. You can level up to your playstyle. Want to be a super stealthy hacker that leaves no trace? You can be. Want to be a super soldier with crazy armor augs and health/energy maxed out? You can be. Want to be a little in the middle? You can be. What you don’t pick doesn’t really affect your game. You are just playing to your preferences. The XP needed to level up isn’t overwhelming either. It feels very natural and non-tedious. By the end of the game, I was very satisfied with how many augs I was able to level up. No grinding necessary. 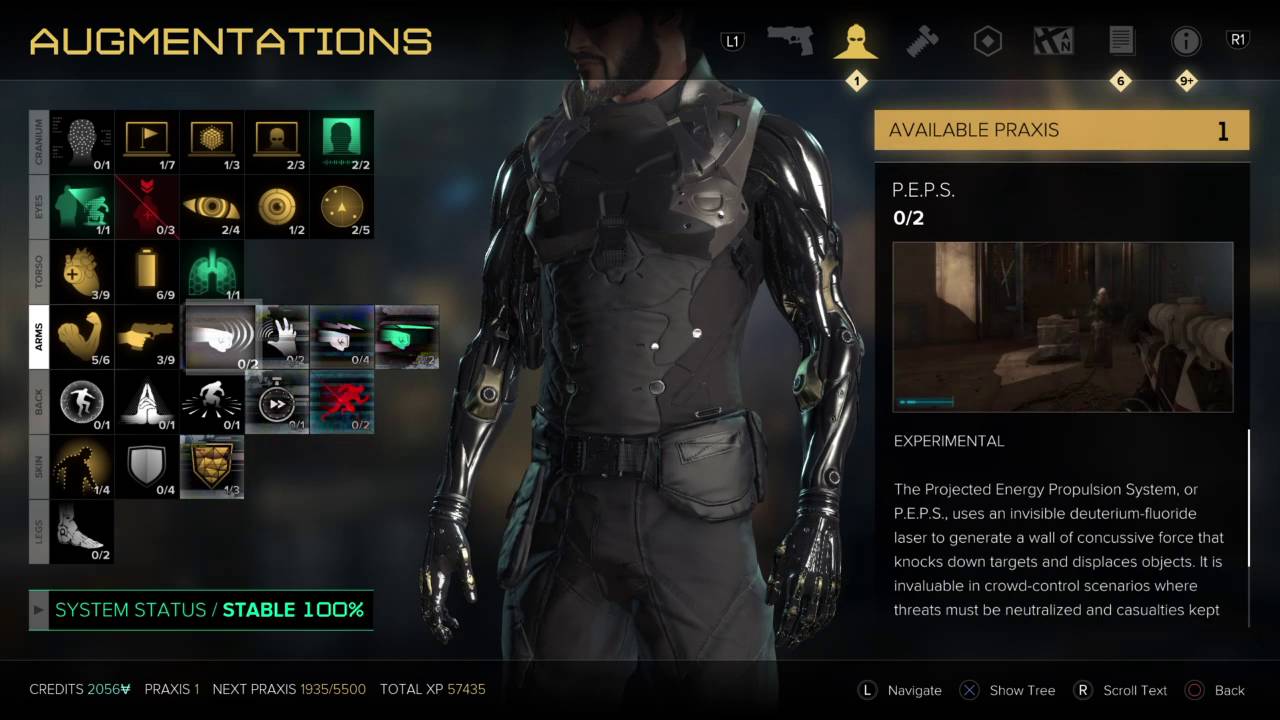 I also love the hacking aspect of this game. Each hack is a minigame in a race against time. Not only do you have a time limit to complete the hack, but you are also hacking in real time, so if an NPC catches you, they will become hostile/sound the alarm. There were several times when hacking that I found myself completing the hack with less than 1 second remaining on the timer. I needed a few moments after those experiences to collect myself. They were pretty intense. If you don’t like hacking, or if you suck at it, or just don’t have the time for it, hacking isn’t the only way to get access to locked doors or computers. You can also find passwords laying around, however, I found that I would find these way after the fact anyway, so I leveled up my hacking aug to max as soon as I could.

Now to talk about some of the things I didn’t like so much. My PC suffered from severe performance issues, lagging, and long load times (up to 10-15 minutes at times). That really sucked. There are times when a quest leads you to another area and I just didn’t want to wait 10 minutes for the area to load! I’m not sure if consoles had this issue, but my PC certainly did. My PC isn’t super high-powered, but it’s able to run 99% of new releases.

Another thing that I wish was different in this game was the inventory system. You are given a certain number of “slots” and items and weapons take up a number of those slots. For example, a health item takes up 1 slot, but a sniper rifle takes up several. It was hard to manage at first. You can upgrade your inventory a bit, but it doesn’t make much difference. The inventory system really forces you to pick 1-3 guns and stick with it. There is no easy storage option either. Adam has a storage locker in his apt, but you would have to travel all the way there to take anything out of it. Quite annoying. I ended up sticking with 3 main guns and ditching everything else.

The ending of the game is pretty abrupt and kind of random. It definitely leaves the door open for another Deus Ex title in the future. I thought I was just on another mission when suddenly the game ended. It was weird. The one thing I did like about the ending is how intricate it was. There were several things happening at the same time and different paths had different endings. It was definitely one of the most intense moments of the game! I wish I could have had some warning that it was the final level, though…and more closure. Oh well, guess I’ll have to wait and see if another Deus Ex game comes out in the future!

Even with the game’s performance issues, I still found myself running back to my PC to get further into the story. If you like first-person games with a mix of a great story, intense decision making, great combat, and optional stealth aspects, this is definitely something you should put on your list. I hope there will be future Deus Ex titles to look forward to!